In the last few weeks, literary circles have been abuzz with Girish Karnad’s comments on Nobel laureates V S Naipaul and Rabindranath Tagore. He lashed out at Naipaul for his antipathy towards Indian muslims at the Tata Lit Fest in Mumbai. After a few days, while speaking to reporters in Bangalore, he called Tagore a second rate playwright. These comments have shaken the literary world. While some have condemned Karnad, some others have supported him. Anyway, we believe that he has right to have his own opinion.

While most of us know Karnad as an accomplished actor, we do not know that he is a prolific writer as well. He is the winner of the prestigious literary awards like the Jnanpith and Sahitya Academy Award. He has also been conferred with the Padma Bhushan.

Karnad always dreamt of being a writer. Surprisingly, he became a writer, but not in English or in his native tongue Konkani. He went on to become a famous playwright in Kannada. His plays have been translated into English and many other languages. 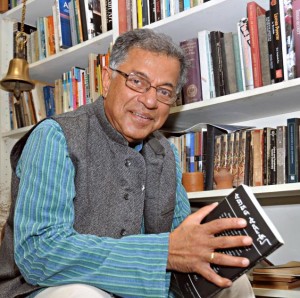 The story of how he wrote his first play is interesting. He was greatly influenced by C Rajagopalachari’s Mahabharata written in 1951. After a couple of years, Karnad says that one day he felt that the characters from Mahabharata were speaking into his ears. He could hear the characters speak in Kannada. He quickly put them down on paper. Thus his play Yayati was created. It was published in 1961, when Karnad was 23 years old. The story is based on the myth of King Yayati, who was one of the ancestors of the Pandavas. Enraged by Yayati’s infidelity, his father-in-law Shukracharya curses him to grow old prematurely. While the handsome Yayati shrinks into frail skin and grey hair, one of his sons offers to exchange his youth with Yayati.

In 1964, he went on to write Tughlaq, based on the Sultan of Delhi, Mohammed-bin-Tughlaq. He later wrote Hayavadana in 1971, in which he used the folk form of Coastal Karnataka, the Yakshagana.

He made his film debut with the Kannda movie Samskara, based on Jnanpith awardee U R Ananthamurthy’s novel of the same name. Karnad not only acted in the movie but also directed it. After that he went to direct and act in many movies including Hindi. His latest film is the blockbuster Ek Tha Tiger.

Last year Karnad went on to publish the first part of his autobiography, Aadaadtha Aayushya. He dedicates his autobiography not to his parents or wife, but to a doctor who refused to abort him. The story goes that his mother went to a doctor, saying that she wanted to abort the fetus. The doctor refused to do so and Girish Karnad was born. Even we thank the doctor for his decision, or else we would have an illustrious writer.