It’s been 25 years since Roald Dahl’s Matilda was first published. A tribute.

If you have read Matilda, you know why we are writing a tribute to a book on its completing 25 years. If you haven’t yet read it, go grab a copy. As you shut the book you will say, “Why didn’t I read it all these years?” You will feel you have missed something in your childhood.

Despite being an adult, you will laugh out loud at every trick by Matilda. Every page will have you giggling. Dahl’s wits will have you smiling long after you are done with the book.

The first person who read it was Dahl’s daughter Lucy. She was in her twenties when she read the manuscript. She simply said, “I loved it.” We guess we too would have said the same thing.

Isn’t it the mark of a good book that it can be enjoyed by people of all ages? With Matilda, Dahl manages to do just that. This year, it is 25 years since the publication of the book. Even after a quarter century, readers continue to relate to it.

Childhood is not always smooth. All those who say that they want to become children again, have possibly forgotten the troubles of being a kid—the constant supervision by parents, the stick wielding teachers, the examinations, the tale-carrying classmates, the bullies at the playground and the desire to grow up fast. Little people have problems much bigger for their size. In Matilda, Dahl does take these big problems of little people seriously, but the story also offers escape. 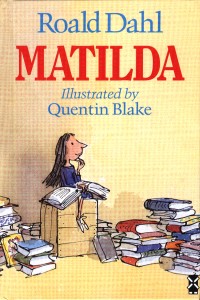 Matilda Wormwood is a kid like most others in many ways, but one who manages to break free from her dimwitted parents. She is not the nice, obedient child, but the intelligent, mischievous one, who we all secretly want to be. She’s also precocious: before reaching the age of five, she has read Dickens and Hemingway. Instead of encouraging her, her parents order her to watch TV and shun books. They think of her as a nuisance.

But Matilda gives as good as she gets, and sometimes better. She gets back at her folks with ingenious tricks, like applying superglue on her father’s hat or hiding a parrot in a chimney to create a ghost scare.

At school she has to deal with the head mistress Mrs Trunchbull, who Dahl describes as a “gigantic holy terror, a fierce tyrannical monster who frightened the life out of the pupils and teachers alike”

Matilda finds solace in her loving teacher Miss Jennifer Honey. With her telekinetic powers, Matilda not only saves the school from Trunchbull, but also gets Honey her rightful inheritance. Matilda then leaves her insolent parents to live with her teacher.

As adults, our problems are not too different from Matilda’s. Only the situations are different. Instead of school, we find ourselves in an office. In place of a head mistress, we have to put up with a boss, sometimes one who is a “holy terror.” We all believe we are surrounded by dimwits.

We should be grateful to Roald Dahl’s longtime editor at Farrar, Straus & Giroux, Stephen Roxburgh, who described an early draft of the book as “hopeless.” Dahl, who was in his 70s at the time and already a best-selling author, felt slighted by this remark, but that did not stop him from rewriting the book completely. He didn’t go back to Roxburg, and instead, went to Penguin, which published it in 1988.

Looking back, it’s hard to imagine Matilda without Quentin Blake’s illustrations. If not for Blake, we would not have had the thin legged, long haired and sharp nosed heroine, perhaps the most popular of all those that a wildly inventive Dahl ever thought up.