From revealing the number of books in the Ramchandra Series, his religious beliefs, and the current book he is reading, Amish bared himself to his fans in a twitter chat. On a question by Woodpie about the book that influenced his life, he replied: Too many to count. If just one book has had a dominant influence on you, then you haven’t read enough!

He is currently reading ‘The Simpsons & their Mathematical Secrets’ by Simon Singh.

Well, Amish advocates voracious reading, which means reading authors other than him too. What better place to find book recommendations and exchange books than woodpie.com

Woodpie has compiled the interaction in a Question and Answer form. The chat was organised by Times Lit Fest Delhi. The fest will be held from November 28 to 30.

Did you write Scion of Ikshvaku as a Ram devotee or as a critical writer? 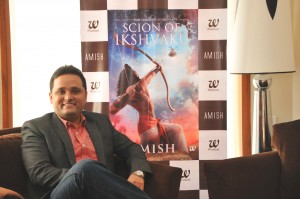 I wrote Scion of Ikshvaku as a devotee. But in the Indian way, devotees are encouraged to have an open mind…

Why another retelling of the Ramayan?

Lord Ram’s tale is a part of our collective consciousness. And all of us approach Him in different ways. The Ram Chandra Series is the way I have approached Him. & I’m glad a few want to share that journey with me

What research did you do for writing Scion Of Ikshvaku?

Most of what I know of our scriptures, I have learnt from my family. My grandfather was a Pandit in Kashi. I also read a lot. So that also helps in research! I normally read non-fiction books.

How much research do you think is just enough? How do you strike a balance between research & creativity?
Follow your heart. Let it set the balance.

How many books should we expect in the Scion Of Ikshvaku series?

Ramchandra Series will most probably have 5 books. It could be 6 as well. I’m not sure at this point of time.

Why does Bharat reveal his real name to Radhika at Gurukul when he shouldn’t?

Good question. Surprised that more haven’t noticed that. Answer will be revealed in book 4 of the series.

When will the Shiva trilogy film come out?

It’ll take a few years. Karan Malhotra is writing the script. And Karan Johar is producing the movie. 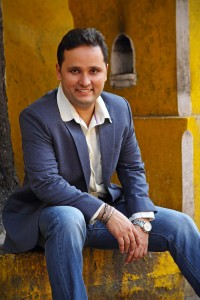 Does pre-launch marketing take away the discussion from the actual content?

Yaar, but the content is not available pre-launch. It only becomes available post-launch… 🙂

Do you think we need a new conversation on religion and its place in Indian public life?

I think most of the Indian public approaches religion with deep pride and innate liberalism. Opinion-maker debate on this subject, though, is sadly extremist (both of the left-wing & right-wing variety). We, the Indian public, need to take back this conversation from the ‘opinion-makers’. I am a very proud Hindu. But equally, I respect other faiths as well. I follow Swami Vivekanand’s teachings.

Which actor will be best suited to play ‘Ram’ if Scion of Ikshvaku is made into a movie?

Too early to comment on that yaar! The book has just been released…

Do you have a tattoo?

No. I have no tattoos. I’m very scared of needles! And I can’t handle pain too well! 🙂

In Shiva trilogy, Nagas worshiped only Ram in Panchavati. Reason for selective worship?

Not true. There’s a temple to Lord Rudra and Lady Mohini in Panchavati as well.

Are you a devotee of Shiva? 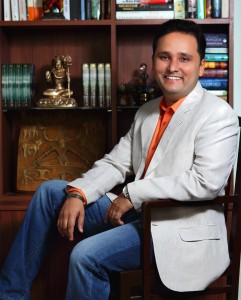 Yes. I’m a devotee of Lord Shiva. I pray to Him every morning. I wear His name on my wrist, literally.

After facing about 20 rejections, you didn’t lose hope. How did you remain optimistic?

The secret is detachment. If you don’t care about success or failure, then rejections don’t impact u.

Which is your favourite book of all time?

Difficult to answer. I read a lot to have just 1 favourite book. I’m reading this great book now: ‘The Simpsons & their Mathematical Secrets’ by Simon Singh. It’s wild!

Your storyline for all 5/6 books is ready?

Yes. The broad storyline is already in my head. Right down to d last line of d last book

When you were writing Scion Of Ikshvaku, which parts are easiest for U to write, and which are the most difficult?
When I don’t try to control the story, it’s very easy to write.

To tick you off while writing, what must one do?
If you stop the music that plays while I write… That will tick me off!

Have you thought about writing on other genre than mythology? If so, what are you areas of liking other than myth?
No plans as yet. But one never knows where life can take you!