A new book for young adults is out in stores. The best part is that it is written by a young adult. 17-year old Suzanne Sangi’s book Facebook Phantom is a paranormal love story. A student at Mount Carmel’s, Bangalore, Suzanne she is also a singer.

The young writer tells Woodpie more about herself in a candid interview. 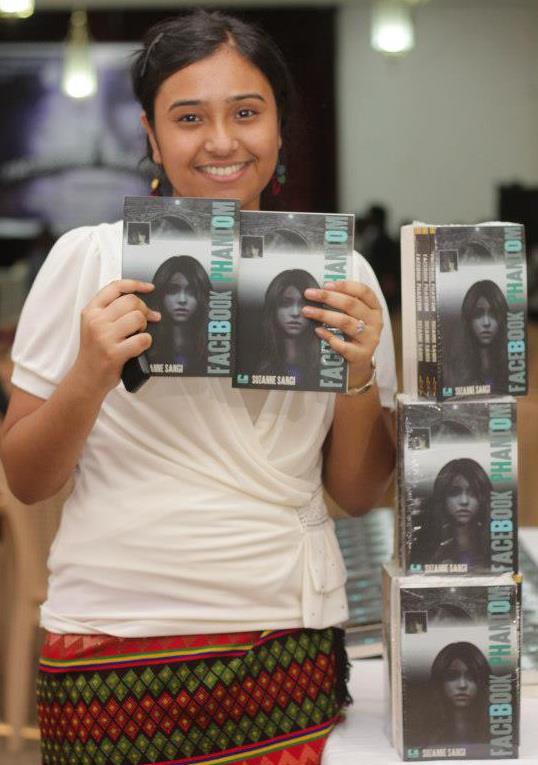 How did you come up with the idea of a Facebook Phantom?

Facebook Phantom is a result of the collective influence of two things – the world’s fascination of this extremely addictive social networking site and my love for the paranormal!

Have you ever been stalked on FB?

Nope. But my sister has been – this has provided quite the inspiration for the book. Somebody had taken her photo and pretended to be her. This had happened twice; it was outrageous! We tried to hunt them down for days until their accounts finally disappeared.

Have you ever fallen in love with anyone on FB?

I have never fallen in love with someone I met on Facebook but I should admit, Facebook has helped me reconnect with crushes I didn’t want to forget! Hehee.

How did you manage studies and writing?

I studied Arts in PUC when I wrote ‘Facebook Phantom’ and to be honest, there was not much workload when it came to studies. Plus, I hardly ever bunked classes (call me a nerd, thank you) except when I had singing practices with the college band. So yes, I managed quite well.

You are just 16. What made you take the plunge at such an early age?

Sorry, I’m seventeen now but yes, I was fifteen when I started writing the book. Well, I’ve been a heavy reader since very early in my childhood. Though the variety that I read isn’t very broad, I’ve always had a liking for fantasy fiction. This is has provided a lot of material for my writing.
And like I’ve said before, I think that fifteen is not ‘too young’ to write a book. Most fifteen year olds today, I believe, could pen a book of their own if they set their minds to it and just let their inborn creativity flow.

What was people’s reaction when they heard that you were writing a novel?

It was always awe at first, though with a little disbelief. And then, they’d go on to ask me what it’s about and admit that the title is pretty catchy. Apart from that, I never gave away too much of the story.

How long did you take to write the book?

It took me exactly a year to write Facebook Phantom – from the summer after my tenth board exams to the following summer.

Was it difficult to find a publisher?

I had sent my manuscript to three publishers and the third one – Duckbill Publishers, accepted Facebook Phantom saying it had potential. I should admit, I had a good feeling the day I sent it to them and two days later they had replied; this was one of the happiest days of my life!

What kind of books do you like to read, and who is your favourite author?

Like I’ve confessed before, I am in love with fantasy fiction and the supernatural. I am a big fan of the Harry Potter series – I practically grew up with it; J.K Rowling’s brilliancy still amazes me. And then I went through the Twilight craze – a brilliant series as well. A few other books which top my favourites would be The Desert Spear by Peter Brett, The Chronicles of Narnia by C.S Lewis and the Percy Jackson series by Rick Riorden.
As for my favourite author, I cannot decide between J.K Rowling and Peter Brett.

Do you plan to take up writing as a career, or do you have any other plans?

Well, my career plans are highly variable at this point. Writing will be a part of any career that I take up. I wish to expand my singing career as well. I also wish to be a Clinical Psychologist and help people.

What do you want to write about next?

I have started working on a new book I named ‘The Valley of shadow of death’. It is basically about the half-human son of the Angel of Death. I hope this turns out to be a full-fledged book like its predecessor ‘Facebook Phantom’.