The last week was perhaps the most important week for English literature in the year. The Man Booker Prize, which is believed to be equivalent to the Oscars for books, was announced.

This year, the prize went to Hillary Mantel for her book, “Bring up the Bodies,” which is the second book in the trilogy. She had won the prize in 2009 also for the first book of the trilogy, “Wolf Hall.’ With this win, she becomes the first woman and the first British author to win the Booker twice.

Even in India there was enough excitement this time, because Jeet Thayil was short listed for his debut book Narcopolis. We still congratulate him, for being shortlisted is equivalent to being nominated for the Oscars, isn’t it?

Many of us wonder what the hullabaloo about this prize is. Here are some quick facts about the coveted Booker.

First awarded in 1969, The Man Booker Prize is an annual award given to the best original full-length novel in English, as decided by a panel of judges.

It is only open to citizens of the Commonwealth nations, Ireland or Zimbabwe.

However, every two years since 2005, the Booker Prize also gives out an international award to a worthy author not eligible for the Booker Prize, based on their entire body of work.

Why is it called The Man Booker Prize?

The prize was originally sponsored by a food distribution company called Booker-McConnell, and quickly became known as “The Booker” for short. The name stuck, even after Booker-McConnell’s sponsorship ended. The current sponsor is investment company Man- and so, Man Booker Prize.

Why is it so important?

The prize is seen as a mark of literary quality – which means a guaranteed rise in book sales.
Winning books are often optioned for movies, they get a huge amount of international press coverage. and the winning author is also given a check for £50,000, making it one of the most valuable literary prizes in the world.

Who are the Indians who won the Booker? 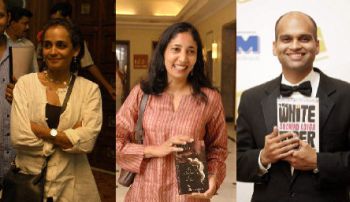 Arundhati Roy for The God of Small Things in 1997

Kiran Desai for The Inheritance of Loss in 2006

Aravind Adiga for The White Tiger in 2008

V S Naipaul won the Booker in 1971 for his short story, In a Free State. Though of Indian origin, Naipaul holds a British citizenship, and also the citizenship of Trinidad and Tobago.