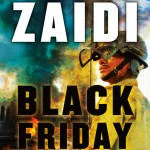 Excerpted from S Hussain Zaidi’s ‘Black Friday- The True Story of the Bombay Bomb Blasts.’   By the time Yaqub Abdul Razak Memon, the third of the Memon brothers, was in his early thirties, he had already acquired the reputation of being the best read and smartest criminal that the Bombay police had ever known. But Yaqub’s story was unusual…. END_OF_DOCUMENT_TOKEN_TO_BE_REPLACED