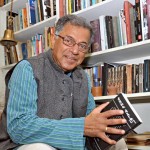 In the last few weeks, literary circles have been abuzz with Girish Karnad’s comments on Nobel laureates V S Naipaul and Rabindranath Tagore. He lashed out at Naipaul for his antipathy towards Indian muslims at the Tata Lit Fest in Mumbai. After a few days, while speaking to reporters in Bangalore, he called Tagore a second rate playwright. These comments… END_OF_DOCUMENT_TOKEN_TO_BE_REPLACED