Do you remember ‘Alice in Wonderland?’ Of course you do. Even if you haven’t read the book, I am sure you remember the TV series that most of us have grown up watching. How can anyone forget the cute Alice and the chubby ‘Paan ki Begum?’ There have been several movies too on the same. 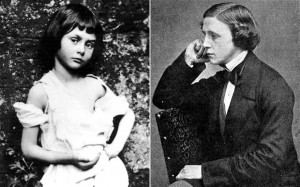 Anyway, let’s get back to the book by Lewis Carroll ‘Alice’s Adventures in Wonderland.’ Yes, you read it right. That’s the full name of the book. The story behind how the book was written also has many wondrous facts.

There was actually a little girl called Alice, for whom this book was written. Alice Liddell was the daughter of the dean of Christ Church, Oxford, where Lewis Carroll taught Mathematics. Carroll used to take Alice and her two sisters on boating expedition on the River Isis. It was on one of those boats rides that the famous fantasy story was born. To entertain the kids, Carroll narrated the story, but never wanted to write it. Alice pleaded to him, and Carroll yielded to her pleas. He took two years to write it down and gifted a handwritten copy to Alice. He called the book, “Alice’s Adventures under Ground.”

A publisher friend of Alice’s family read the book and persuaded Carroll to publish the book. Carroll then wrote the book in detail and asked John Tenniel to make the illustrations.

Though the book was an instant success, Carroll was ashamed of it. He thought that it was “nonsense.” He was a researcher and lecturer at Oxford, and had written several books on mathematics and logical subjects. So he didn’t use his real name for the Alice books.

His real name was Charles Lutwidge Dodgeson. He used this name for his research books, and wondered what people would think of him, if they knew that the same person had written children’s books. He never acknowledged in public, that he was Lewis Carroll. When fans wrote letters to Lewis Carroll, Christ Church, Oxford, he sent back a printed letter saying that there was no one with that name at the address.

Well, how much ever he tried to hide the fact that he had written the so-called “nonsense” books, and wanted to be known for his math books, it was not to be so. Today, we all remember him by his pen name for the imagination filled books that he wrote with his heart, and not the studious stuff that he authored with his mind.
Perhaps, it’s true that the heart knows better than the mind.