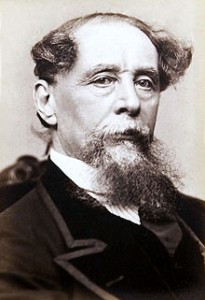 February is a month of celebrations. Our little bird found another reason to host a party. This month marks the 200th birth anniversary of Charles Dickens. The legendary writer was born on  Feb 7, 1812, and so our bird decided to invite all the neighboring birds to celebrate two centuries of the birth of the genius.

The magpie, the parrot, the pigeon, the sparrow, the nightingale, the kingfisher and the crow, were all her guests. She baked a cake and made some tea. The guests perched themselves around the nest, smelling the books on the shelves. With a cup in one hand, they began to chatter, each telling what Dickens meant to them.

For every one, he was something different. While the crow remembered him for this satire, the magpie said that there was no match to his art of portrayal and caricature of people, which is seen in the characters in his novels. “He didn’t even spare his own father. The character Mr. Micawber in ‘David Copperfield’ is the caricature of his own father,” chirped the kingfisher. While the parrot considered him a sharp journalist, the nightingale lauded the captivating plots in his books, which were inspired from real life.

Well, our little bird held Dickens in very high regard for the person he was. “Even after spending a tumultuous childhood, during which his father was jailed and he was sent to work in a blacking factory, he managed to come out victorious. His erratic schooling could not stop him from becoming a journalist and then one of the great writers of all times. I bow to his strong will and perseverance,” our bird said.

The pigeon hailed him for all the books that he had written. “Great Expectations, Bleak House, Oliver Twist, Little Dorrit, A Tale of Two Cities, A Christmas Carol; they are all my favorites. I can read them again and again,” she said.

“How can you?” asked the sparrow. All eyes turned towards the sparrow now. “How can you read them? They are classics, which mean that they are boring and tiring,” she added.

At that moment, our little bird, the woodpie was boiling some water in the kettle. She quickly ran out of the kitchen and said, “I understand that classics can be a little difficult to read. But we should understand that they were written for a different age altogether. The language might have evolved since then. This does not mean that we can undermine the intellect, and the depth that these stories have to offer.”

The pigeon joined in, “Even art and paintings have changed since time. Leonardo da Vinci painted the ‘Monalisa’ during the renaissance. These days, the paintings are totally different. Just because modern art is not like what was painted earlier, we cannot neglect the ‘Monalisa.’ Same is the case with classics.”

The sparrow made a long face. “I’ll try,” she said. Our little bird smiled and said, “I know, that our lives are busy and we may not have the time and patience. So why not make a beginning by reading an abridged version of Dickens’ novel. I am sure, you will love the wonderfully spun stories.”

The birds then bit into the cake and sang aloud together, “Happy Birthday Charles Dickens.”

Our little bird and her friends will be thrilled if you too join in their celebrations. They call upon you to post your wishes for Charles Dickens. So, come on! Comment and key in your wishes!