Author Amandeep Sandhu opens up to Woodpie in a tete-a-tete. He talks about his childhood, violent school, his beliefs and of course his books. Here is the transcript of his interview:

From being a farm-hand, salesman, teacher, journalist, tech writer and novelist; it’s been a long journey. How has it been?

Now that is a very big question but luckily I have answered them partly through my two semi-autobiographical novels. The journey has been one of learning and of not allowing myself to get locked in one idea about myself. It continues …

After becoming a novelist, do you feel you have finally found your calling?

Both your books, ‘ Sepia Leaves’ and ‘Roll of Honour,’ are part autobiographical. Was it difficult writing them?

Yes, it was but I was okay with the difficulty. If the issues I deal with were any easier I could have perhaps dealt with them in real life too. It is because they perplexed me that I took time writing them out, to understand where they came from, what can be done about such issues. 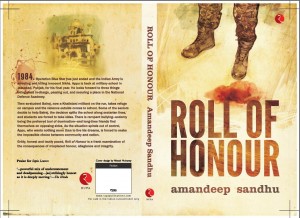 ‘Roll of Honour’ has mentions of gory incidents in the hostel. Have you witnessed them in your school life?

Roll of Honour was around 1500 pages in draft. It is a 242 page book now. The draft was much more violent. Life is mostly much more violent. Often reviewers remark that the violence seems incredulous but I toned it down a lot and, of course, removed repetition. Fact is, people live through such violence(s) and often go silent about them. I chose to speak.

Both your books are quite literary and miles away from the mass market fiction that is churned out these days. Was it difficult to get published?

With the internet and self publishing and e-publishing, the English writing scene has exploded in India. Still, on an average a big Indian publisher get about 10000 manuscripts per year. Is it then a wonder why authors do not hear back? I went around with my manuscript for three years before a small press got interested and then took another couple of years to publish Sepia Leaves. Just then my current publisher came up with their offer. It was a handsome offer. By the time the second book came my publisher remained open to publishing me and the wait was also not too long. Who knows what will happen with the next book.

How have the sales been? What do the readers say?

The sales have been steady for Sepia Leaves. They sort of peaked this year, five years after the book was published. I guess it was because of the buzz of the second book, Roll of Honour. Roll of Honour has not been out too long, I am yet to get the figures. The reader reaction for Sepia Leaves has mostly been: ‘Thank you, for writing this story.’ The reason is that the incidence of mental illness is very high in the country but caregivers or family members do not talk about it. Many do not know how to talk about it. So the book became a channel of sorts. It has been reviewed well and has gone on to the UN, the WHO, into the hands of policy makers and so on. It also brought me recognition from various activist groups and from the Sahitya Academy. I hope it brings about an opening up of the pains we live with and pushes us as a society to find solutions. Roll of Honour has met brilliant reviews, the readers have also been satisfied. Let us see, its journey has just begun. 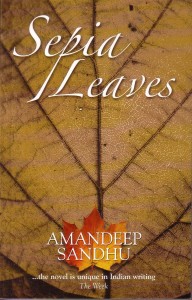 What is the response from the Sikh community?

While the rest of the world has opened up to Roll of Honour, I feel not much has come from Punjab in terms of a response. I wonder why. Many friends and even reviewers have suggested that I translate the work soon in Punjabi. I am doing that but the reasons are deeper. I feel the wounds and the pains are deeper and the society may take time but will respond over time.

What do you personally think of the Khalistan movement and India’s stance?

I feel most political movements are a result of three things: sense of respect/belonging, development/aspiration, and greed/nobility of purpose. I feel in Punjab the three were mixed in such a way that the potent poison only put the state back by a couple of decades and did not bring any real good. It has been about two decades now. I think it is in the interest of India and other regions in conflict to ascertain the reasons why Punjab got into such a fix and ensure that we do not repeat our mistakes.

What do you think of popular fiction in India? Is the quality of literature deteriorating?

The writings are for all of us to see. Yet, so much good work also manages to disappear so quickly, thanks to the adolescence of new technology and the business of sales. Some of the best works in world literature remained buried for many ages until they became seminal works. We are all in a churn, let us see what emerges from the sagar manthan.

Which author inspires you?

The models for Roll of Honour were Mario Vargas Llosa’s The Time of the Hero and William Golding’s Lord of the Flies. However, the writer from who I have learnt the most is Ryszard Kapuscinski, a Polish journalist.

What book are you working on next?

As of now on a couple of projects and trying to understand which project consumes me so I can fall in love with it for a couple of years. You can say I am working various fields, planting different crops and let us see which ones survive and then I will shape it into a book. 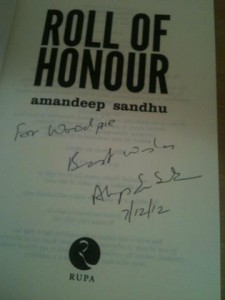