She is a fearless storyteller. Her stories for children tell the truth. Yes, they are fiction, but steeped in reality. Paro Anand doesn’t paint a rosey picture of the world for children. Instead, she presents the world of children as it is- with insecurities, fear and even violence.

Her book ‘No Guns at My Son’s Funeral,’ told the story of a child terrorist in Kashmir. The book was on the IBBY Honor List. Her other book ‘The Little Bird who held the Sky up with his Feet,’ was on the 1001 Books to Read before you Grow Up.

Paro Anand will be in conversation with Lucy Hawking, on Cosmic Treasue Hunt, at Mountain Echoes Literary Festival 2015 to be held from August 19 to 22 at Thimpu, Bhutan.

Paro Anand spoke to Woodpie about her stories, the way she writes and the books she loves, in this interview: 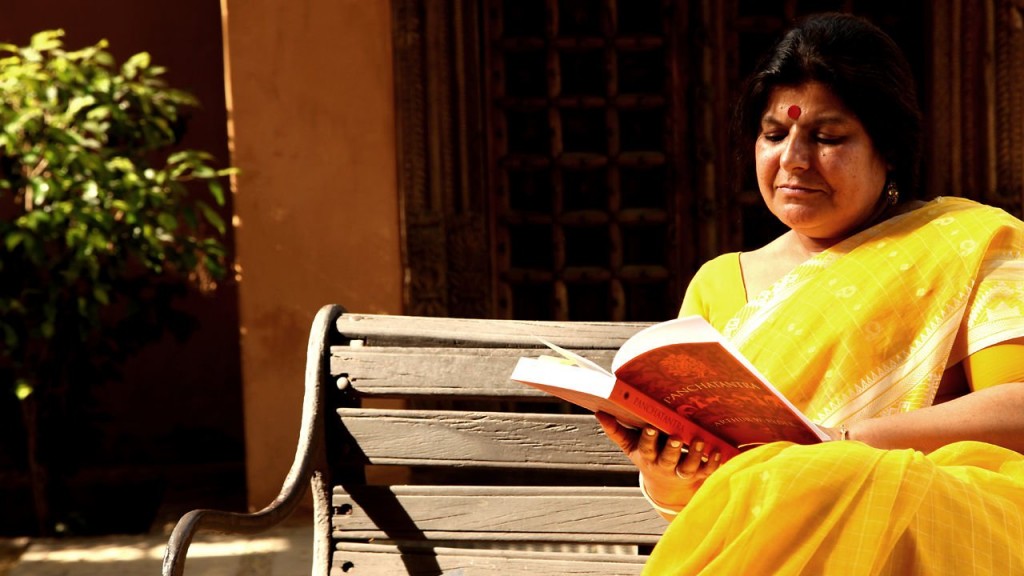 1. How did you start writing for children? Did you plan on becoming a children’s writer, or did a story just flow out from you?
I wasn’t a great reader, honestly. But we had this family time every evening, after we came back from work/play/classes/tuitions. We would be bathed and changed into night clothes. My father would put on some classical music, either Western or Indian and we all sat with our books and read. My parents and sister were avid readers. But I used to be impatient for that hour to be over so that I could talk and tell everyone everything about my day. But, instead, we read. So willy-nilly, I did read a fair bit, even if it was under protest. Of course I’m grateful for it now.
Plus, I was a great liar, and that’s the honest truth. I felt my life was very boring, so I made up stories about an alternate life that I pretended I was leading. It got me into trouble loads of times…and my poor mum who was always having to cover my tracks when, like, a neighbour asked if she liked Japan more than Mexico and such. Actually, we’d only been to my grandparents house in Simla. But where’s the story in that. So, well, I decided to make lying my profession. and its ironic that I am now known as a writer who tells the truth!
Two other things contributed too. One, we had this group of mad friends in Nizamuddin and we made it a game to knock on people’s doors and ask ridiculous questions like, “Is this where the black panther lives?” We’d be all neatly dressed up, good little girls asking at every door. And the rumours started that someone in Nizamuddin was housing a black panther. The other was my grandmother. But no, she didn’t tell us good little folk stories about good over evil. She made up the most hilarious stories about her friends that she played cards with. They were wicked, bitchy and utterly fun. I recount them to this day.
So yeah, I meandered into this amazing world of writing and performance storytelling

2. Your stories are based in reality and conflict. Why do you choose to write on these subjects?

I set out wanting to write just fun stuff, the kind of story I’d like to read. But early on, when I’d tell a story that I’d written, I was kind of blown away with the engagement young people had with it and I realized there is a huge power to these stories. Because, within the safety net of story, kids were more open, more willing to talk about difficult issues, because it was ‘fiction’. Also, when I started going to the smallest villages of India through the National Book Trust, I realized that a story can’t just be a fun read to be chucked away once you are done. where there were very, very few books, each one had to go a little further, do a little more. have more weight.
That’s when I started my program, Literature in Action, a program that reaches out to young people to get them to talk about things that they are already talking about, or should be, through a guided story-safe way. I find that young people are so open once you approach it with honesty, and the power of story. So each of my two lives – one as a writer, the other as a storyteller, feed each other and keep the other part alive and well.

3. Have you ever faced criticism for the kind of stories you write?
Of course, because I have always shunned ‘safe spaces’ in my writing, a lot of people ask me why I don’t just write the fun stories that I sometimes do. Once, in fact, president Abdul Kalam asked me. He had read No Guns at my Son’s Funeral, he had really liked it and he was honoring me for it, but he asked me why I wrote a book like that for young people, why not write happy stories? and I said it was because the kids faced a world that was a less than happy place. Because men in power had done that. If there was a perfect world, I would write perfect storeis. but as long as there are imperfections, that’s what I feel I should write. Because through these stories, kids understand those imperfections better. Or at least are able to grapple with them, knowing they are not alone.
Once, my son was at a book store, buying No Guns and an elderly gentleman customer said, “Beta, you should not buy this book. My son asked why and the man siad it was because it didn’t look like a good book for a boy his age. When my son revealed that it was written by his mother, the man looked at him with pity in his eye, thinking what a horrible mother I must be!!! Another time, I had to be literally escorted off stage to safety because another gent objected to the kind of subjects I said should be written about.
4. Is your book, ‘No Guns at My Son’s Funeral,’ inspired by one particular person? How did the story come to you?
It wasn’t one person, but one moment in time. I was in Baramullah, working on a project with the army, of making children construct the world’s longest newspaper (it was so and I am a proud world record holder). Then the Kargil conflict blew up and we were stuck there, no one able to return to their homes, so we kept working on our newspaper project. One morning, I was awoken at 4 am with the sounds of bomber jets screaming overhead. Later, when reading what the kids were writing, what struck me was that not one of them was ratifying violence either of the army or of the terrorists, they just wanted peace. and I realized that while we read a lot about war and violence, we quite forget about the young lives that struggle towards an uncertain future, and how vulnerable young people are. I met a young terrorist. and was again struck by what a good kid he seemed to be. So normal, so cute, heartbreakingly handsome, yet, he was accused of rape and murder. How did he come to be what he had become? So it isn’t one place or one person, it is innocence trapped in violence.

5. What do you think of children’s literature published in India? Do you think anything more should be done?
I’m actually very positive about it. Of course, much more needs to be done, but many publishers, especially, as far as I know, in English, are pushing boundaries, being braver. In many Indian languages, though, they’re still playing too safe. You have to realize that children have so much access to information,we can’t cotton ball them in fairy tales anymore and then complain that they don’t read.

6. What are you currently working on?
I am currently working on a novel which is an ambitious project. Also, there are two books with publishers, one is called TWO and is co-authored by a Swedish writer and an illustrator, the other is called Like Smoke which is a collection of short stories – edgy and young adultish. Plus, I have fingers in two other pies, one a novel for adults and the other a beautiful project on Nanda Devi alongwith a Polish photographer. I am more and more interested in doing mash ups with different writers and people of different areas of expertise. to experiment….

7. In this age of internet and video games, how do you think children should be attracted to books?
By writing and producing the kind of books that young people want to read. Having them available on line. promoting them through social media and clever new ways of talking about them, blogging etc. I am optimistic about the future of books. Also, let’s not only look at the urban areas, there are so called B and C towns awaiting good books.

8. Is there a book you wish you had written?
Dare I say harry potter? Although, not just for the money it made, but for the sheer expanse of the series. I wish I had that long a vision. Also, Wonder by R J Palacio

9. Is there a book that has influenced your life. Is so, which and how?
Watership Down by Richard Adams and Born Free by Joy Adams made me want to be involved with animals, so I started writing about them. Roald Dahl and Haroun and the Sea of Story for their sheer limitless imaginative narratives.

10. Please recommend any three books for our readers.
All of the ones i have mentioned above and also, Wanting Mor by Rukhsana Khan , Slightly Burnt by Payal Dhar and there’s something about Muskaan by Himanjali Sankar.