Mahesh Bhat’s book Bengaluru/Bangalore In First Person Singular, takes us through the changing faces of the city.

The green canopied Bangalore is no longer there to see. Those who have seen it before the IT boom reminisce about it. There is also the Old Bangalore area which still has lanes selling jasmine flowers and vermillion. Photographer Mahesh Bhat has captured Bangalore over the years and the various facets of it.  He has presented the images in his book, Bengaluru/Bangalore In First Person Singular.

In a career spanning over 25 years, Bhat has been commissioned assignments from publications as varied as New York Times to Newsweek of Japan. 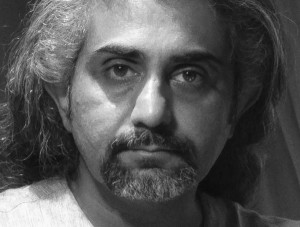 How did you come up with the idea of the book Bengaluru/Bangalore In First Person Singular?

A few years ago I was sitting in Nandan Nilekani’s office at Infosys. He asked me if I thought Bangalore had the potential to be a great city. Given that for a city to qualify as one, there should be an atmosphere for art and culture to thrive and tolerance for personal choices, my immediate answer was a clear “No.” Some time later, Swami, manager at a well-known bookstore asked me if I was planning another book on Bangalore. My answer was a “No.” But both got me thinking. That’s how it started.

What has been your association with Bangalore?

I visited Bangalore for the first time in 1974 with my mother. We traveled overnight in a ‘luxury bus’ from Mangalore. My uncle picked us up from Ananda Rao Circle and drove us to his home on Hall Road, Richards Town, in the heart of the Cantonment. A few days later we made a trip to the Pété or the Old City to visit my mother’s friends. When we returned, my cousin who was a teenager then, asked if Avenue Road (Arterial road of the Pété) was like she imagined it to be—a treelined boulevard. When my mother told her that it was narrow and crowded, she was disappointed. My cousin was born and brought up in Bangalore but in the Cantonment. And like the people of the Pété, she had no contact with the ‘other’ side. For the people of the Cantt, Bangalore then was a small area of about 25 sq km. That was their cosmos. But Bangalore has always been a different city for different people, from its founder Kempegowda to the Britishers, from South Bangaloreans to residents of the Cantt and now the new settlers. And as it happened with my cousin, the city assumes its own character in peoples’ imagination. Though I was excited to be in Bangalore when I moved in from Mangalore in late 80s, in the last decade or so, the overwhelming feeling has been a ‘disconnect’ with the city.

What changes have you noticed in the city from the time you first moved here? Do you like these changes?

Well, the city has grown tremendously. In late 80s and early 90s every place was 15-20 minutes away from each other. Now they are one or two hours away. You can drive for 60 km and you are still in Bangalore! Unfortunately there is no water in the city, garbage, sewage and intolerance are piling up. No I don’t like it. The only hope is the younger generation and recycling of waste water! 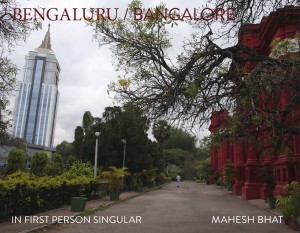 What place in the city do you love to photograph again and again?

There is no one such place..

How has the response been to your book?

How do you find life as a full-time photographer?

Its great, fantastic at times, has helped me experience life like no other profession. But sometimes its pretty confusing as well.

These days a lot of people are buying SLR cameras and trying their skills in photography. What do you think of this crop of people?

It’s only natural as technology has made it easier to shoot pictures. I really don’t think much about this crop of people!

Any advice to wannabe photographers?

Learn to see and tell stories!

Do you have plans of coming out with any other book?

I am currently working on the second volume of UNSUNG ( www.unsung.in) and making a book-app of Bengaluru/Bangalore In First Person Singular.

To buy copies of the book signed by Mahesh Bhat go to http://www.maheshbhat.com/bangalore-book/pre-order.html