It has been 12 years since the 9/11 attacks on the World Trade Center. The stories of the victims continue to haunt us. What makes the 9/11 attacks so intriguing is that it was just not any other terrorist attack. It shook the United States of America, a superpower. It brought home the fact that terrorism is not native to the “poor” countries. But anyone can be its victim.

In the meanwhile, the stories of the survivors tell us how the human spirit can overcome every obstacle.

Reluctant Hero: A 9/11 Survivor Speaks Out About That Unthinkable Day, What He’s Learned, How He’s Struggled, and What No One Should Ever Forget 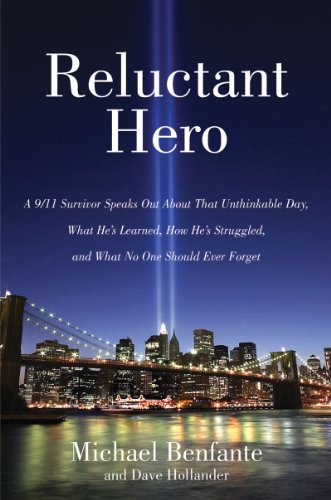 On Tuesday, September 11, 2001, Michael Benfante went to work, just like he had day after day, at his office on eighty-first floor in the World Trade Center North Tower. Moments after the first plane struck, just twelve floors above him, Benfante organized his terrified employees, getting them out the office and moving down the stairwells. On his way down, he and another co-worker encountered a woman in a wheelchair on the sixty-eighth floor. Benfante, the woman and Benfante’s co-worker then embarked on a ninety-six-minute odyssey of escape—the two men carrying the woman down sixty-eight flights of stairs out of the North Tower and into an ambulance that rushed her to safety just minutes before the tower imploded.

A CBS video camera caught Benfante just as he got out the building, and almost immediately, the national media came calling. Benfante sat on the couch with Oprah Winfrey, where she hailed him as a hero. Almost one year to the day after 9/11, Benfante got married and the woman in the wheelchair sat in the front row.

That’s the storybook ending. But in the aftermath of 9/11, Benfante began a journey fraught with wrenching personal challenges of critical emotional and psychological depth in Reluctant Hero. Benfante shares the trappings of his public heroism, the loneliness of his private anguish, and the hope he finds for himself and for us. Because all of us—whether we were in the towers, in New York City, or someplace else—we are all 9/11 survivors. 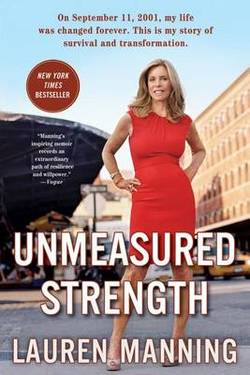 She was a hardworking business woman, had a loving husband and an infant son, and a confidence born of intelligence and beauty. But on 9/11, good fortune was no match for catastrophe. When a wall of flame at the World Trade Center burned more than 80 percent of her body, Lauren Manning began a ten-year journey of survival and rebirth that tested her almost beyond human endurance.

Fleeing the burning tower, Manning promised herself that she would see her son’s face again. Courageous and inspiring, Unmeasured Strength tells the riveting story of her heroic effort to make that miracle—and so many others—possible.

Angel in the Rubble: The Miraculous Rescue of 9/11’s Last Survivor 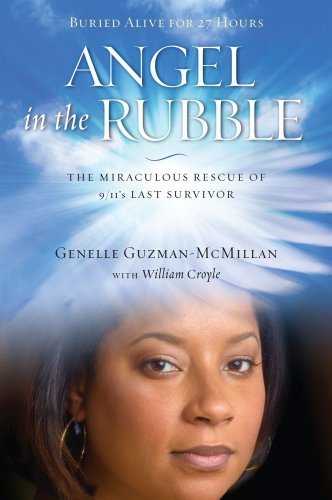 The Miraculous Gift of a Second Chance
Am I dead?

But I was in too much pain to be dead, right? I put my left hand right up to my face, but I couldn’t see even a hint of it. As I lay on my right side, my right arm and leg were pinned underneath me. A huge slab of concrete pressed against my head. Mustering all my strength, I pushed against it. Nothing. With my left hand, I could feel that an immense steel beam encased the rest of my body.

I was sealed in a coffin of concrete and steel. I screamed for help, but my voice went nowhere. I was alone. Completely alone. ‘ For twenty-seven hours, Genelle remained below the surface of Tower One’s rubble. During this time, she couldn’t help but reflect on the life she’d lived and how she’d drifted from the faith she once knew. One of her most painful regrets was that she’d left her daughter behind in Trinidad while she pursued her dream of singing and dancing in America. As death now seemed certain, she feared where it would take her. And then she remembered witnessing the miraculous recovery of her aunt when she was a child in Trinidad. Maybe . . . just maybe, God had a miracle for her as well.

For hours she prayed, remembering each detail of her walk away from the faith she’d known as a child. She begged God to forgive her—accepting that she may soon die, but praying for the miracle of life and a chance to live that life with a new purpose and direction.

God answered her prayer by sending an angel to sustain her. Now living in the light, Genelle is making good on the promises she made in the dark while buried in the rubble.