Is Hinduism greater than Islam, or vice versa? Is Urdu better then Hindi?  These questions aren’t new, but seem to have been around since the time the languages came into being.

Sadat Hasan Manto shows us the frivolity of the comparison and offers a solution too in his story Hindi-Urdu.

Woodpie brings you the story excerpted from the book My Name is Radha: The Essential Manto, by Saadat Hasan Manto, Translated by Muhammad Umar Memon, published by Penguin Random House India.

The Hindi–Urdu dispute has been raging for some time now. Maulvi Abdul Haq Sahib, Dr Tara Singh and Mahatma Gandhi know what there is to know about this dispute. For me, though, it has so far remained incomprehensible. Try as hard as I might, I just haven’t been able to understand. Why are Hindus wasting their time supporting Hindi, and why are Muslims so beside themselves over the preservation of Urdu?

A language is not made, it makes itself. And no amount of human effort can ever kill a language. When I tried to write something about this current hot issue, I ended up with the following conversation:

MUNSHI NARAIN PARSHAD: Iqbal Sahib, are you going to drink this soda water? 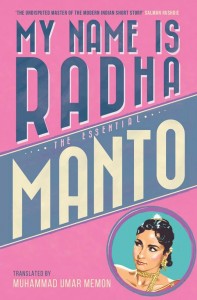 MIRZA MUHAMMAD IQBAL: Yes, I am.

Munshi: Why don’t you drink lemon?

Iqbal : no particular reason. I just like soda water. At our house, everyone does.

Munshi: In other words, you hate lemon.

Iqbal: Oh, not at all. Why would I hate it, Munshi Narain Parshad? Since everyone at homes drinks soda water, I’ve sort of  grown accustomed to it. That’s all. But if you ask me, actually lemon tastes better than plain soda.

Munshi: That’s precisely why I was surprised that you would prefer something salty over somethingsweet. And lemon isn’t just sweet, it has a nice falvour. What do you think?

Iqbal: Nothing. I was just going to say that I’d take soda.

Munshi: Same nonsense again. I’m not forcing you to take poison, am I? Brother, what the difference between the two? Both bottles are made in the same factory after all. The same machine has poured water into them. If you take the sweetness and falvour out of the lemon, what’s left?

Munshi: Then, what’s the harm in drinking the lemon?

Iqbal: No harm at all.

Iqbal: And what will you drink?

Munshi: I’ll send for another bottle.

Iqbal: Why will you send for another bottle? What’s the harm in drinking plain soda?

Munshi: And what will you drink?

Iqbal: I’ll get another bottle.

Munshi: Why will you send for another bottle? What’s the harm in drinking lemon?

Iqbal: N… n… no harm. And what’s the harm in drinking soda?

Munshi: None at all.

Iqbal: The fact is that soda is rather good.

Munshi: But I think that lemon… is rather good.

Iqbal: Perhaps… Ifyou say so. Although I’ve heard all along from my elders that soda is rather good.

Munshi: Now what’s a person to make of this: I’ve heard all along from my elders that lemon is rather good.

Iqbal: But what’s your own opinion?

Iqbal: My opinion… hmm… my opinion. My opinion is just this… but why don’t you tell me your opinion?

Munshi: My opinion… hmm … my opinion is just this… but why should I give it first.

Iqbal: I don’t think we’ll get anywhere this way. Look, just put a lid on your glass. I’ll do the same. Then, we’ll discuss the matter leisurely.

Munshi: No, we can’t do that. We’ve already popped the caps off the bottles. We’ll just have to drink. Come on, make up your mind, before all the fizz is gone. These drinks are worthless without the fizz.

Iqbal: I agre. And at least you do agree that there’s no real difference between lemon and soda.

Munshi: When did Iever say that? There’s plenty of diffeence. They’re as different as night and day. Lemon is sweet, falvourful, tart- three things more then soda. Soda only has fizz, which is so strong it just barges into your nose. By comparison, lemon is very tasty. One bottle and you feek fresh for hours. Generally soda water is for sick people. Besides, you just admitted yourself that lemon tends to be tastier than soda.

Iqbal: Well, that I did. But I never said that lemon is better than soda. Tasty doesn’t mean that a thing is also beneficial.Tahe achaar, it’s very tasty, but you already know about it’s harmful effects. The presence of sweetness and tartness doesn’t prove that something is good. If you were to consult a doctor he would tell you the harm lemon does to your stomach. But soda, that’s something else. It helps digestion.

Munshi: Well then, fill this glass halfway with soda.

Iqbal: Why don’t you fill half the glass with lemon? I’ll pour my soda after that.

Mushi: Makes no sense. Why don’t you pour your soda first?

Iqbal: Because I want to drink soda-lemon mixed.

Munshi: And I want lemon-soda mixed.