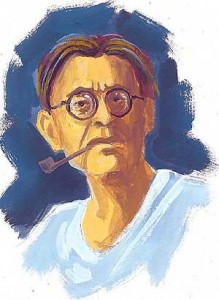 Sadat Hasan Manto is perhaps one of the greatest chroniclers of India’s partition. His stories brought out the pain and pathos of the people split between India and Pakistan. This year, the literary world commemorates his centennial birth year.

Born in 1912, Manto was an Urdu language short story writer. His stories touch the human heart and surpass all language and time. The English translations too evoke the same emotions in the reader that his original Urdu works do. Perhaps, it’s because Manto gives us the true picture of the human condition, and his writing is beyond the barriers of language. He is best known for his short stories, Bu (Odour), Khol Do (Open It), Thanda Gosht (Cold Meat), and his magnum opus Toba Tek Singh.

No part of human existence remained untouched or taboo for him. He sincerely brought out stories of prostitutes and pimps alike, just as he highlighted the subversive sexual slavery of the women of his times.

His bold writing attracted criticism. He was tried for obscenity six times, three times in India before 1947 and three times in Pakistan after he moved there, post-partition. It didn’t deter him from writing his mind. He once said, “If you find my stories dirty, the society you are living in is dirty. With my stories, I only expose the truth.”

His magnum opus Toba Tek Singh still moves readers to tears. The story is set two or three years after the 1947 Partition, when the governments of India and Pakistan decided to exchange their Muslim, Sikh and Hindu. It revolves around Bishan Singh, a Sikh inmate of an asylum in Lahore, who is from the town of Toba Tek Singh. As part of the exchange, Bishan Singh is sent under police escort to India, but upon being told that his hometown Toba Tek Singh is in Pakistan, he refuses to go. The story ends with Bishan lying down between barbed wire and dying in no man’s land: “There, behind barbed wire, was Hindustan. Here, behind the same kind of barbed wire, was Pakistan. In between, on that piece of ground that had no name, lay Toba Tek Singh.”

Saadat Hassan Manto was born in Paproudi village in Ludhiana district of the Punjab in a Kashmiri Muslim family of barristers. Manto received his early education at Muslim High School in Amritsar but he remained a misfit throughout in school years, rapidly losing motivation in studies, ending up failing twice in matriculation. His only love during those days was reading English novels, one of which he stole from a book stall in Amritsar Railway Station.

After finishing his graduation from Aligarh Muslim University in 1936, he moved to Bombay. Here he started writing scripts and dialogues for Hindi films, including Kishan Kanhaya (1936) and Apni Nagariya (1939). But in 1941, he accepted the job of a writer for All India Radio and moved to Delhi, but soon returned to Bombay after a quarrel with his boss. He got back to the film world and wrote scripts for Aatth Din, Chal Chal Re Naujawan and Mirza Ghalib.

After India’s partition, he moved to Lahore, where he wrote for newspapers and magazines. Though he wrote some of his best stories there, the conservatives found them controversial and banned his works. With no much work coming his way, he ran into financial trouble. Under stress he took up drinking and died of cirrhosis of liver at the age of 42 in 1955.