Mayur and I grew up, and to this day live, in a small place
called Uday Park in Delhi which was a small colony where plots
of land were given to the families who had lost a member to
the war of 1971. The resulting demographic therefore was a lot
of working ladies who were the heads of the family and a lot
of kids without fathers who had only each other to really learn
from. Ours was a world where every noble cause was real and
not just a ‘lesson’. Being a ‘good friend’ was the most critically
important thing in the world and letting a friend down was a
blasphemy of unspeakable proportions. We told each other the
usual stories all kids in India hear and we were the characters
in them. We were Ram and Lakshman and the mighty army
that marched to Lanka. We looked out for one another and
it was us versus everyone else. We taught each other lessons
in loyalty, goodness and strength. We stuck together and our
support structure was us. The older boys were responsible for
the younger ones; the younger ones in turn respected the older
ones. The girls who played football and cricket with us were pals
and those who played with dolls were to be avoided at all costs.
When the chips were down, it was either turn to a father who
was not there or a mother who was the sole bread earner and
was away. Neither worked for us and so we evolved the greatest
bond it had been our honour and good luck to evolve: the bond
of friendship that runs deeper than most relationships.
No matter what the problem was, we were always there for
each other. If someone broke a window while playing cricket,
we all stood in silence with the breaker and got screamed at by
the uncle or aunty whose house had suffered the damage. If 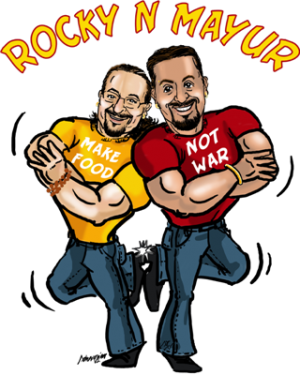 someone was not well, we all accompanied him or her to the
local doctor. If someone was falling behind in studies, one or
more of us brought them up to speed; we exchanged comics
and books till we were all readers, we discussed ideas with our
naive black-and-white wrongs and rights and became the people
we admired. To this day we do it: a sort of one for all and all
for one. The advantages of having this whole group of people
to back you are many but the greatest joy of all was, is and will
always be, the food!
We were a little India crammed into one small area. There
were ‘aunties’ from all across the country. War isn’t selective—
from Kashmir to Kerala, from Gujarat to Arunachal they were
all there. Do you begin to see why the breaks were so important?
A quick first break took me to hot Idlis and Dosai. This is
when it paid to have friends, and I had many. I would ensure
Mayur was on my team as his daadi made the most amazing
paranthas; while we waited for our turn to bat, it was a matter
of minutes to run down and ask her to make some paranthas
for us. Between paranthas we would run back and forth from
the park to see the status of the game because batting too, after
all, was important. Once into the fielding part it was a little
tougher to get away but since we were all solid pals, the batting
team provided a substitute fielder as we ran to Joyjit’s house for
some machher jhol. We would be endlessly hungry due to all
the running we did and lunchtime was an important occasion
when everyone discussed what was being made in everyone
else’s homes. My favourite was, and to this day continues to be,
Pinku’s house where Raj Aunty would make the most amazing
Kashmiri Pandit food. Yes, it was all vegetarian as she was a
vegetarian but the kathal she made was better than any mutton
you will ever eat. Her daughter, who was my classmate in school,
has gone on to become world famous and I’m talking about Dr
Shikha Sharma of Nutri Health Systems who is the best-known
face of nutrition in India. Luckily for me, Shikha always ate
small quantities which meant more for me. Once in a while, I
still get that much-loved tiffin with a few of my favourite things
in it. But that’s another story.
It could be mutton made at Puneet’s house by Mona Aunty,
or Bhopali dishes made at Bobby’s place by Baby Aunty or those 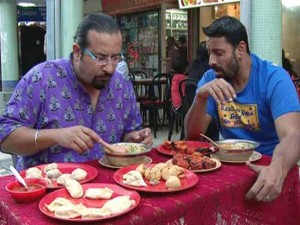 amazing stuffed karelas that were made by Malti Aunty who is
Manoj’s mum, which were almost as good as the chicken curry
that Rita Aunty made at Biri’s place. The list goes on and the
foods were magical. Post lunch we would be forced to rest for an
hour as siestas were still the order of the day back then. This is
when the fruit situation kicked in. Fruits were not things that were
bought in ones and twos from the market. Fruits were sent in by
the crate from family members who owned orchards, and were
brought in by family that would travel to Delhi from ancestral
villages. Mango season particularly comes to mind here. Buckets
filled with water and topped to the brim with mangoes were left
in a corner somewhere. In a couple of hours the mangoes would
be cool and we would eat them literally by the bucket. Plums,
pears and litchi were my favourites and came from our place
in Dehradun. One family could never finish those quantities
but help was always close at hand. Now you may begin to see
a pattern emerge as to why Mayur and I are such good friends
to this day. We would help other people find solutions to their
food-storage problems—we were always like that.
Cricket would resume at four in the afternoon, and only
mad dogs and us were out playing. Kids who lived close to the
park were responsible for cold bottles of water being brought
to the park during drink intervals. But this was only till 5
p.m. After five the party would start in earnest. We could hear
‘Garaaaaaammmmmmm’ from a mile which meant the choley
bhature wallah was coming. I kid you not when I say that you
will not find such delicious choley bhaturey anywhere else even
today. The guys who come now are the sons of the old man who
made his rounds when we were kids, and the cholas still taste
exactly the same. The game would be suspended and those who
had money would buy and those who did not would beg for a
loan which was always extended.
Memories are a funny thing since Mayur and I were always
friends.
This is why we are still friends after thirty-eight years. In one
word: FOOD.
Let’s get back to our game of cricket which would only
then be resumed after Doodhnath had gone. Who was this
Doodhnath you may ask? He was our legendary ice-creamtrolley- 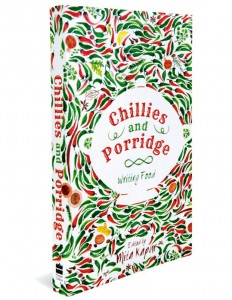 wallah. The man with a cool attitude and a cool solution
to all your heat problems. The man with the ice cream. He was
also the man with the copy in which he wrote down what we
owed him as we had large appetites and very little money. He
would be paid on birthdays and other festive occasions when
we ran into some money. Sometimes we ran up bills to the
tune of a thousand rupees. In today’s day and age that would
be roughly the equivalent of Rs 10,000 and that, my friends, is a
serious amount of money. But Doodhnath never complained,
he never said no to anyone and when you finally did clear your
bill, he always gave you a mango duet for free.

Excerpted with permission from ‘The Food Wicket’, by Rocky Singh and Mayur Sharma from Chillies and Porridge: Writing Food, edited by Mita Kapur, HarperCollins Publishers India.

If you like the book, recommend it on Woodpie.com