Shakuntala Devi, hailed as the human computer, was not just a mathematical genius. She was an author too. Besides writing books on math, she also wrote cookbooks and novels. 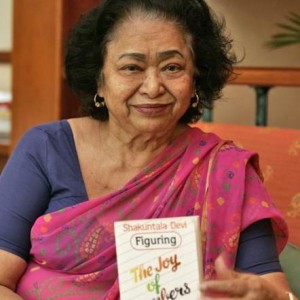 It is astonishing how a person with no formal education could don so many hats. Perhaps, it is not only her intelligence that should be commended, but her spirit also. Born to a circus performer, she spent her childhood in poverty. She too performed with her father from a very early age. It was during one of these performances, that her genius was discovered. When she was just three years old, she showed exceptional memorization skills at her card tricks. She memorized card numbers and stunned her audience and family. Eventually, she became the bread winner of the family, and had to perform despite her wishes.

In one of her interviews Shakuntala Devi bitterly recalls her childhood days. “I had a very sad childhood. My parents were poor and forced me to do shows, much to my discomfort. I would be woken up at odd hours to entertain guests for meagre amounts of two or three rupees. If I made mistakes, I would even be beaten up,” she says.

These travails did not stop her from nurturing her love for numbers. She went on to gain international fame. She beat computers, experts and even entered the Guinness Book of World Records.

Little is known about Shakuntala Devi’s writer-side. In the 70s, when homosexuality was still a hush-hush topic in India, she wrote the book, The World of Homosexuals. It was the first published study of homosexuality in India. She once said that her interest in the subject came from her marriage to a homosexual. She ends her book with an appeal to decriminalize homosexuality. She demands “full and complete acceptance- not tolerance or sympathy” for homosexuals.

She also wrote a mystery novel, Perfect Novel. It’s light-read and the length of the story is short. She also wrote short stories. The anthology is called The Blessed Fisherman and Other Stories.

Through her books for children, she tried to simplify mathematics for children. She believed that every child could become a genius like her. She wrote, Awaken the Math Genius in Your Child, In the Wonderland of Numbers, Super Memory: It can be Yours, Figuring: The Joy of Numbers, and Puzzles to Puzzle You. She also wrote books on astrology and cookery.

Shakuntala Devi could achieve these fetes without any formal schooling because of self-education and reading. “You don’t have to attend an institution; your level of awareness can get you anywhere. I just love reading and probably that has given me a lot of knowledge about various aspects of life,” she said.

She passed away in Bangalore in April 2013 at the age of 83. On her birthday on November 4 th 2013 Google too paid a tribute to her on their logo.

We could pay our tribute to her by reading her books.