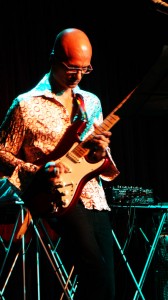 This year, the Booker Prize could come to a Bangalorean. Let’s root for Jeet Thayil, whose book Narcopolis has been long-listed for the Man-Booker Prize 2012. He is the only Indian in the list too. When he heard the news, the 51-year old writer tweeted, “Absolutely thrilled.”

Besides having his family here, Bangalore has shaped this writer in many ways. He grew into becoming a poet and musician here. He was part of the band, The Chronic Blues. Perhaps, his love for the city pulled him from New York back to Bangalore.

Jeet Thayil moved to New York in 1997 to do a Masters in Fine Arts (MFA) from Sarah Lawrence College, after which he took up a job in a newspaper in Manhattan. While living there he completed his third book of poetry. But he wanted to write full time. That wasn’t possible in the US, so he returned to Bangalore in 2007. Here he devoted his time to writing and music. He later turned writer to pen Narcopolis, his debut novel which went on to be long-listed for the Booker.

When asked how poets make a living, he replied, “Poets don’t make a living. They need day jobs.” He admires poetry by Bob Dylan, Dom Moraes, Baudelaire and Dylan Thomas.

If you ask him what you read, he admits to reading anything that he can lay his hands on; from fiction, history, guide books and even cook books. He believes that you cannot be a good writer, unless you are a good reader.

His wife Shakti Bhatt a writer and editor died in 2007 after a prolonged illness. His father noted journalist, writer and Padma Bhushan awardee TJS George lives in Bangalore.

His novel Narcopolis is about drugs, sex, death, perversion, addiction, love, and god. Set in Bombay of the 70s, the book tells us the story of the opium addiction of the city and how it gives way to cheaper heroin from Pakistan. The book has arresting characters like Dimple, the eunuch who makes pipes in the den; Rumi, the salaryman and husband whose addiction is violence; Newton Xavier, the celebrated painter who both rejects and craves adulation; Mr. Lee, the Chinese refugee and businessman; and a cast of poets, prostitutes, pimps, and gangsters.

The 12 books in the long-list released were chosen from 145 titles by a panel of judges chaired by Sir Peter Stothard, Editor of the Times Literary Supplement. The shortlist of six authors will be announced on September 11, and the winner on October 16. Let’s hope Jeet Thayil makes it.

We wish him success!